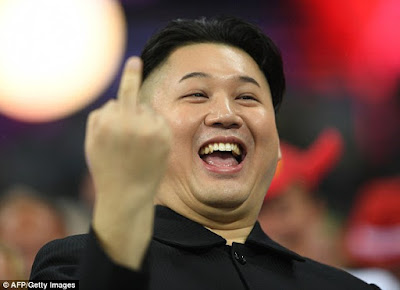 Quite a few "deliverables" have been announced by North and South Korea wrt the forthcoming winter Olympics:

- North Korea will send a 230-member cheering squad to attend the games.

- A Taekwondo demonstration team will travel to the South on the 7th.

- The North and South will carry out joint training of the South and North Korean skiers at Masikryong ski resort built by Kim in 2013 in the North.

- The North will send a 150-member delegation to PyeongChang Winter Paralympics in March.

It has taken South Korea (ROK) ten years of hard work and planning to bring the Games to fruition, and North Korea only a matter of days to steal the whole show!

Kim is currently punching way above his weight (and he isn't exactly skinny) wrt the Olympics and the stand off with the USA; let us trust and assume that hubris does not lead to a fatal error that will cost the lives of millions!


www.olympicsdiary.com brought to you by www.kenfrost.com "The Living Brand"
Posted by Ken Frost at 10:35 AM