The Face of Hoof 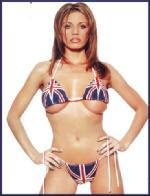 Mary King, who won silver in Athens in 2004 and bronze in Beijing for Team eventing, said:

"She is dedicated to her riding. I understand that she even had her breasts reduced to help her with her riding. That shows real dedication. And she's good with children."

As I have said earlier, the only way the Britain can "top" the Beijing games is to do them in a thoroughly British way.

The appointment of Ms Price to the promotion team, coupled with Boris Johnson leading the pack, adds a very British touch to the games.

Don't forget to visit www.theolympicswarehouse.com
www.olympicsdiary.com brought to you by www.kenfrost.com "The Living Brand"
Posted by Ken Frost at 11:34 AM